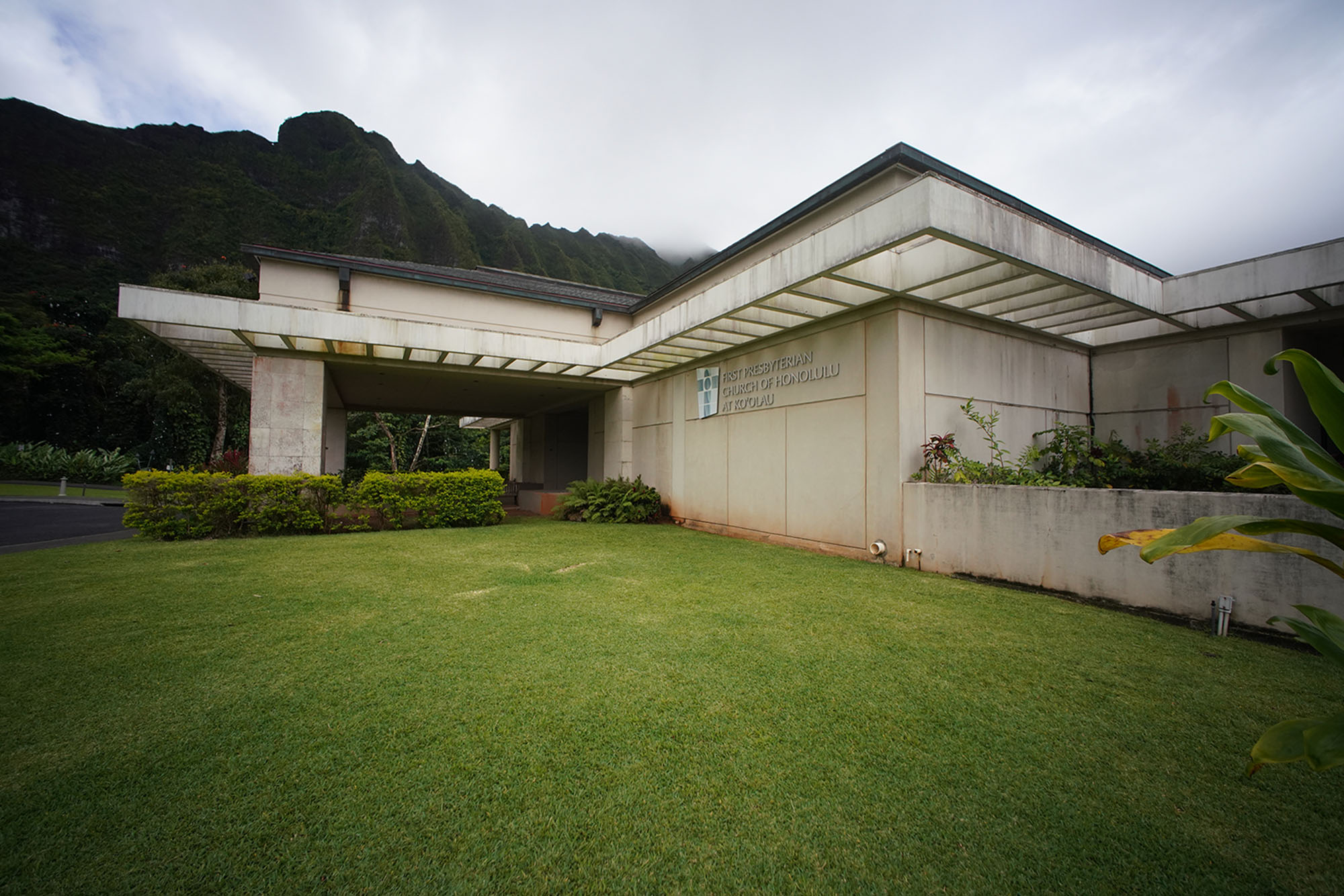 Denby Fawcett: A Kaneohe church is turning its golf course into a commons

The First Presbyterian Church of Honolulu has a unique facility. For a time it was the only church in the world to have an 18-hole golf course—with golfers teeing off outside while the congregation worshiped God inside in the clubhouse.

It may sound strange, but the church’s Koolau Golf Club in Kaneohe functioned flawlessly until September 2020, when the company that handled golf operations for the church said it was closing permanently.

The golf management company blamed the pandemic, but there were other reasons: The private golf course that hugs the cliffs of Koolau has been a money loser since Minami Group USA opened it in 1992. It was too rainy (78 inches per year), too difficult to play with its steep hills and deep canyons, and too far from Honolulu.

To decide what to do next, the Church commissioned Church member architect and planner Kelly Miyamura to find feasible ways to transform the 246-acre golf course into a community resource accessible to a broader constituency than serves only golfers.

“Typically, a property owner approaches a property with a pre-existing zoning plan. What we do is the opposite. By first listening to community members and longtime residents of the area, we learn about the country’s opportunities and limitations of what has worked well in the past before we finalize the development plan,” says Miyamura.

Church executive director Christopher Pan says members of the Windward congregation were initially concerned that the church might seek to maximize its profits by building high-rise buildings and other developments on the golf course.

The property is surrounded by three freeways and is adjacent to the growing residential neighborhoods of Kailua and Kaneohe.

Instead – still in planning – the fairways, greens and sand bunkers are to be replaced by more environmentally friendly open spaces.

First Presbyterian is exploring opportunities that include sustainable farming and health and wellness options, including bike paths, hiking trails and campgrounds, as well as programs to encourage renewable energy use and cultural and educational learning opportunities for people interested in green employment.

“It’s unusual for a landowner to convert an already developed property back into a conservation area,” says Senior Pastor Dan Chun.

Chun sees a very spiritual component to the church’s effort to restore the property to a more natural state – land that for 30 years brought joy to just a select few to hit golf balls on beautiful fairways at the foot of the Koolau Mountains.

“Owning this land is a gift that can be used for something bigger: to work to restore the land for the replenishment of people’s souls and to serve the larger community,” he says.

Cost would be a deciding factor for most landowners, but as a nonprofit organization, Chun says the church’s main hope is to break even.

“We’re not a hedge fund that has to make 13% annual profits,” says church director Pan.

As the planned golf course transformation progresses, First Presbyterian continues its worship services in the 110,000 square foot clubhouse with its marble floor entrance and indoor waterfall, originally built for the pleasure of Japanese millionaire golfers.

And it continues to make money on its operating expenses by leasing its Koolau ballroom and conference center with its full commercial kitchen overseen by a chef capable of preparing hundreds of meals for meetings and parties.

First Presbyterian expects to submit a master plan to the Department of Land and Natural Resources in its application for a new zoning permit early next year. With the current CDU permit, the church can only use the property as a golf course.

“All of our dreams are pending DLNR approval,” says Pastor Chun.

As it works on the application, the church has invited parishioners for a series of workdays to begin clearing the property of the thousands of invasive plants and trees clogging the ravines around the compounds and replacing them with native species to replace those that once thrived at the foot of koolaus, including hala, koa, and mamaki.

Jayme Grzebik says: “It’s important to get going. The invasive trees and weeds will not stop growing while we await the completion of the paperwork for the new permit.”

On Saturday, a group of about 30 volunteers fanned out deep in one of the front nine holes’ canyons to girdle and peel the bark off fast-spreading, invasive albizia trees in a bid to kill them.

“The albizia trees overshadow everything, nothing can grow under them,” said volunteer Lee Cranmer, a member of the Church.

She is a horticultural scientist formerly of the University of Hawaii College of Tropical Agriculture and Human Resources and former manager of UH’s Master Gardener program.

According to Miyamura, interviews and oral histories by students at Windward Community College about Kupuna have revealed that taro was once grown in the area. Also on the land behind the golf course was a hala grove famous for the particularly sweet scent of its hinano, or flowers. Later there was a dairy.

You’re probably wondering how the church came to own a private golf course that cost its original Japanese investors an estimated $80 million.

Lead Pastor Chun says it was nothing short of a miracle. Everything came together at once to make it happen.

The fast-growing First Presbyterian had exceeded the parking and space limitations of his original property at Nehoa and Pensacola Streets and had been looking for a new location to expand for years when he heard about the golf course. It had already saved $8 million, which it combined with $15 million from the sale of its church property in Makiki to Hawaii Catholic Charities.

The funds were used to purchase the Koolau Golf Course for $20.3 million, with cash remaining to remodel portions of the golf clubhouse to accommodate the expansion of the 1,500-member community.

Well, the phrase you hear most often from the church is the weight of its responsibility.

“It is important that the church shows that it can be a partner in caring for God’s creation. We have an enormous responsibility. We have to show that we can do it right,” says Pastor Chun.

In Hawaii, a bullet rips through the Kailua woman’s home, narrowly missing her