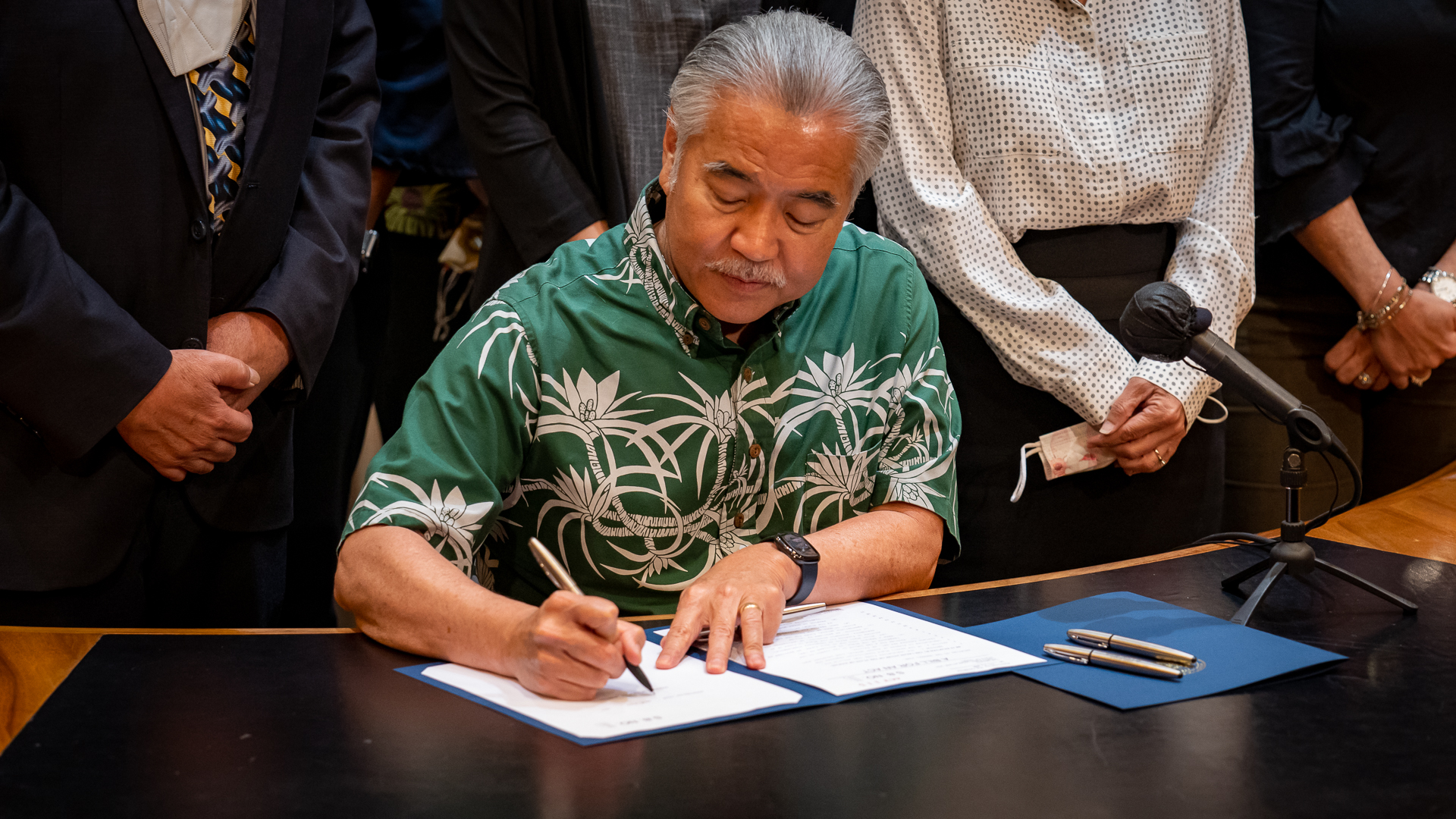 Like many politicians, Governor David Ige describes himself as an advocate of transparency and accountability. On July 12, while vetoing Senate Bill 3252, Gov. Ige resigned Rauch and Spiegel.

He ignored a unanimous legislature and a public demand for change, eschewing any pretense of government accountability and cementing his reputation as a governor committed to keeping the public in the dark.

The people of Hawaii need the candidates running for our next governor to make a commitment to do better. You must commit to actively supporting SB 3252 at the next meeting.

SB 3252 would have made it clearer that media companies and nonprofit organizations cannot be charged hundreds or thousands of dollars for an agency to review public records before the records are released.

For example, under SB 3252, if a reporter wanted to examine building permit files or procurement contracts within the city and county of Honolulu to investigate leads on bribery, he could do so free of charge. Other applicants — commercial entities, attorneys, and those with no intention or ability to educate the general public about the records — would still have to pay fees.

Current law already provides for a “waiver” of fees for these applications “in the public interest”. When the legislature allowed fees in 1988, it stated that fees “must not be a means of disallowing access to public records,” and called on enforcement to “take aggressive action against any agency that uses such fees to enforce the exercise of first amendment rights.” to prevent. ”

The legislature (including then MP Ige) recognized that excessive charging as a barrier to public access would be the easiest way for authorities to cover up incompetence or corruption and hide from public scrutiny.

But attorneys general have, for the last 25 years, allowed agencies to intentionally abuse the fee structure by requiring upfront fees so high (and unjustified) — after only offering a $30 rebate — that applicants are kept out of public view Interest routinely simply give up the request.

If you went to a movie and found out that admission was waived, how would you feel if the theater charged $10 at the door?

It’s a discounted rate, but would you consider that a waiver?

SB 3252 would have simply clarified what everyone already knows: giving up means free.

Back in 2014, Gov. Ige explicitly supported limiting public record fees to just copying costs — not just for public interest applicants, but for everyone. This gave the public hope for a more transparent government in Hawaii.

Then the pandemic happened. Embracing the authorities’ fear and concern, Governor Ige declared that the Public Records Act no longer exists. No other governor in the country has done that – not one.

Who thinks the public deserves less information during an emergency? It took months for the public to regain some level of access and a year and a half for Governor Ige to fully reinstate the law.

To justify his actions, he would claim that authorities have requested more public records during the pandemic than in previous years. But to Gov. Ige’s embarrassment, government agencies have been tracking information about requests for information for years. The data completely contradicted what the governor said (government agencies: FY2019, 7,547 requests; FY2020, 5,604 requests; FY2021, 3,705 requests).

Governor Ige’s explanation for his veto of SB 3252 is more the same. First, he claims that the waiver would apply to “virtually all requests for records.” Indeed, if he had read the legislation and accompanying committee reports that emphasized the limited scope of the waiver — or had the Attorney General properly explained to him its effect — it would be obvious that the fee waiver does not extend to all applications.

For someone who repeatedly invokes his engineering training when criticized, Governor Ige’s lack of attention to detail and hard data comes as a surprise – when he did in fact care about transparency.

Next, Gov. Ige that authorities use fees to discourage inquiries. This is exactly why SB 3252 is necessary. Lawmakers emphasized that fee waivers fulfill the critical role of public records “to maintain government accountability and transparency and to support citizen participation in government decision-making.” Excessive record-keeping fees mean that only the wealthy and elite have access to information that affects the way our government works.

Finally, Gov. Ige alleges that the authorities have to pay overtime and disregard their normal duties of responding to recording requests. However, the law already provides that authorities can indefinitely delay a response if responding to a recording request would unduly interfere with normal duties. It is amazing that the Attorney General allowed Governor Ige to make such a grossly inaccurate statement of the law.

Governor Ige had no rational justification for vetoing SB 3252.

Current gubernatorial candidates must commit to government transparency and accountability. Too many examples of corruption and incompetence have rocked Hawaii in recent years. There is no better solution to such shady behavior than the light of public scrutiny and an informed electorate.

Specifically, candidates should commit to introducing and advocating for SB 3252 as part of the governor’s legislative package for the upcoming 2023 legislative session. After Governor Ige’s empty campaign promises, a vague promise to increase transparency is obviously not enough.

The public should know exactly where the next governor stands in terms of government accountability, beginning with a commitment to get SB 3252 through the legislature and sign it into law by this time next year.

Governor Ige had no rational justification for vetoing SB 3252. His decision was motivated solely by fear of transparency.

Our next governor shouldn’t leave us in the dark. Be better – and maybe find an attorney general who understands that prosecutors have responsibilities both to their client agencies and to the public interest.

How long will Hōlei Sea Arch remain in Hawaii?