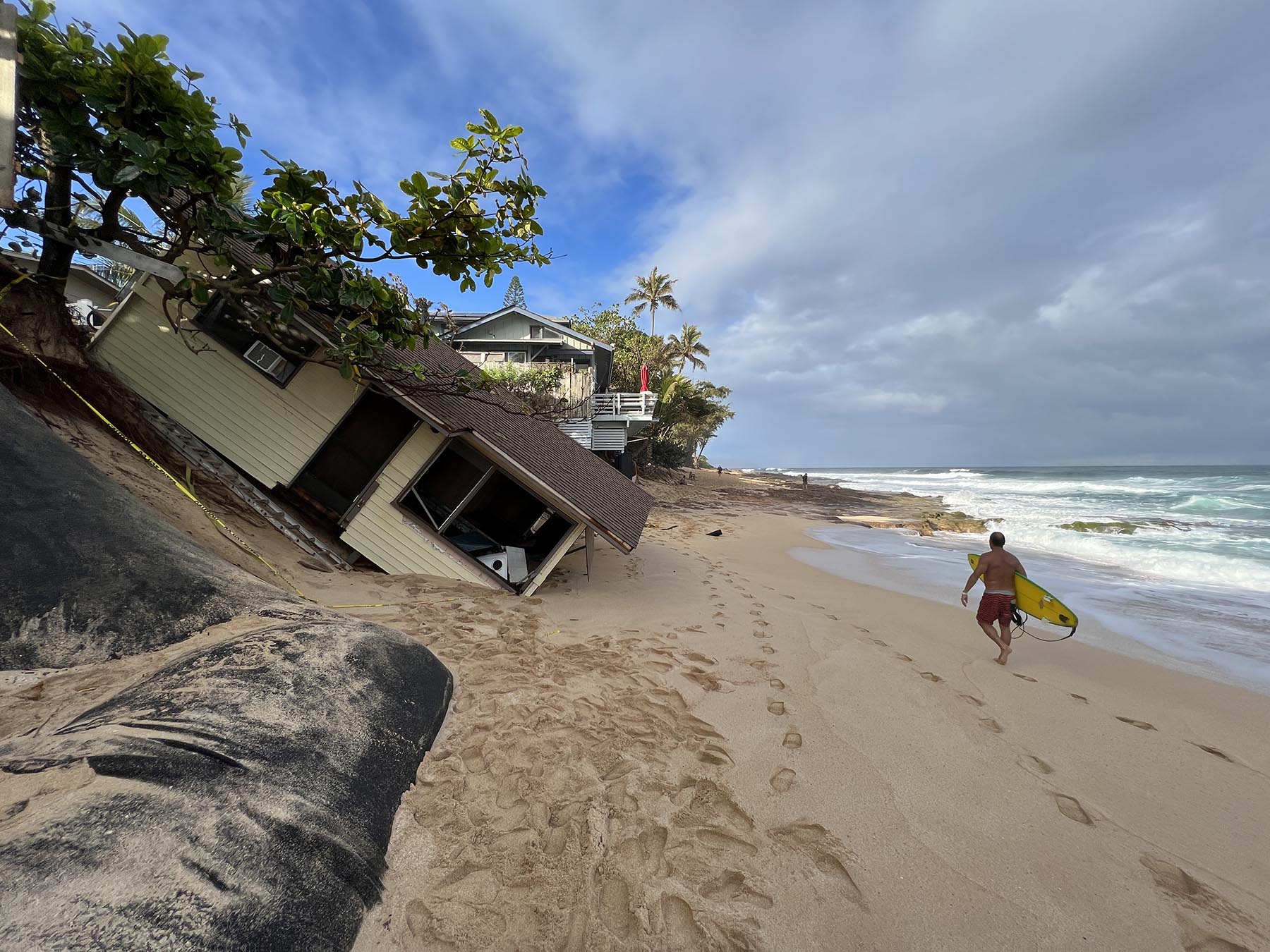 Heed the urgent warning about houses sliding into the sea

On February 28, two environmentally significant events occurred, both of which were of great importance to all residents of Hawaii.

The first was a calculated warning from Berlin: the release of the International Panel on Climate Change, “Climate Change 2022: Impacts, Adaptation and Vulnerability,” came while most of us here in Hawaii were still asleep.

The second took place right here on Oahu, also while most of us were sound asleep: The house at 58-181 Ke Nui Road fell off its tofu block foundation and fell onto the beach and into the surf zone at Rocky Point. As far as I can tell, the first coastal building on Oahu to fail in the age of global warming.

Everyone in Hawaii Nei, if we are realistic about our circumstances, will accept this and mark it as a warning that is just as critical as that provided by the IPCC 2022.

I’m a documentary photographer whose work often focuses on climate change issues. 2019 was a busy year for me. I photographed the campfire burn zone 100 days after the megafire and wrote about its long-term and often underreported consequences. I took this fire as a dire warning – 87 dead, nearly 19,000 buildings destroyed, the city of Paradise, California annihilated, its 26,218 residents becoming climate refugees.

I spent time documenting the Youth Climate Strike protests in Los Angeles, where thousands of school-age children took to the streets in well-organized demonstrations to alert society to concerns about their future in the face of global warming.

My final assignment of the year was to take portraits and interview staff at the Jet Propulsion Lab in Pasadena, one of the nation’s premier climate research facilities, as they spoke to me about their concerns for the future as atmospheric temperatures get closer to 1, The average was 5 degrees Celsius above the pre-industrial level. This level is a threshold that scientists have defined as a hard limit for safe human habitation on planet Earth.

The year 2020 brought us the pandemic and I spent the year at home helping organize a series of climate themed speakers at the Iolani School as the world shut down. together with dr With Chip Fletcher and many others, I spoke to the Iolani community about our climate situation, its urgency and what it could mean for us here in Hawaii.

These last two years have shown us in minute detail what a global pandemic looks like. As the world warms and we humans increase our pressure on natural ecosystems, we can expect more such pandemics in the coming decades, and our position at the crossroads of the Pacific puts us in direct jeopardy.

Today I’m working on creating a shoreline photograph of the island of Oahu, the island that is my home and that raised me just like my parents did, diving, surfing, swimming, hiking and drinking in a paradise that was flawed even at its core in the 1970s and 1980s, but not nearly as badly affected and in such danger as they and we are today.

Our situation presents us with very difficult questions that we must answer quickly and collectively, just as the family who own the collapsed house on Ke Nui Road wrestles with their own unimaginable questions after this latest Northwest wave.

While taking photos on Ke Nui Road, I was told that the owners of the home are a Hawaiian family who have held the property in their family for five generations. I am told that they are woven into the fabric of their North Shore community.

I didn’t need to be told that they are a family who did nothing wrong, even if they are paying the price today for our society’s acceptance of an extractive petroleum economy and our state’s willingness to support destructive coastal armor.

This is a family answering convoluted, intertwined questions she didn’t try to ask, and we all face them as a contractor works to stabilize their collapsed building to haul it back onto the sand cliff with an excavator and determine if it is possible to salvage or need to be dismantled. The contractor’s work is work that I can’t help but see metaphorically.

The 2022 IPCC report contains crucial warnings: that issues of disaster recovery, retreat and reconfiguration of our societies away from burning fossil fuels and towards environmental protection and justice are as urgent as removing 58-181 Kenui Road from the beach, where it would otherwise be, would soon break apart and lose its dangers to the surf; that climatic hazards are increasing and becoming more ominous than predicted a decade ago; that the threats we face will increase unless we maintain plus 1.5 degrees Celsius as our final warming threshold; that we have not done enough globally to adapt to, let alone remain safe from, the consequences ahead; that the ability of humans and ecosystems to cope with increased warming becomes a dwindling prospect as the world warms by every tenth of a degree to plus 1.5 degrees Celsius and beyond. And it reminds us that the poorer you and your society are, the poorer your outcomes in a heated climate.

The experience of a lone Hawaiian family with a North Shore home that slipped into the water is Hawaii’s canary in a coal mine. It is a warning as strident as IPCC 2022. Their experiences and all of us as we approach the conditions we have been repeatedly challenged cannot possibly be undertaken alone. Their circumstances and ours are so burdensome that it will require the full weight of the State, City and County of Honolulu and the community, and this requires a re-evaluation of old paradigms on which our country and state were built; the unassailability of private property, infinite growth, instant gratification.

Forced to react under pressure to the failures of society as a whole, the owners of 58-181 are innocents in the larger climate picture. Our society on Oahu, knowing what we were reminded of by the IPCC this week and seen at Rocky Point, will not be innocent when large local populations are left to fend for themselves as sea levels rise and shores subside, storms continue flood us, wildfires increase and threaten, killing days with high heat indexes.

We must start our work today, there is no way to turn back the clock.

We knew that our dependence on fossil fuels was a loaded weapon aimed at the health of our atmosphere, that it would raise sea levels, and watched as it enriched a few and served to underpin inequality affecting many Preventing Kanakans and Indigenous families from owning their own homes in a country where Indigenous and local ties are losing to a real estate paradigm that rewards only the wealthy.

We must start our work today, there is no opportunity to turn back the clock, and we must be willing to speak openly and honestly and kill golden cows – there will necessarily be significant, difficult compromises and readjustments. Our politicians and business leaders need to start thinking differently and in a more personal way about the state’s many vested interests and broken paradigms. They must think imaginatively and involve community members whose voices they are not necessarily used to hearing.

If we fail to do the work before us quickly, thoroughly, and fairly, I will forever document disasters and suffering as the climate warms, and I won’t have to travel far to do it.

Many travel restrictions are relaxed. Here’s the latest for March 2022

Jacquemus is heading to Hawaii for his spring 2022 show