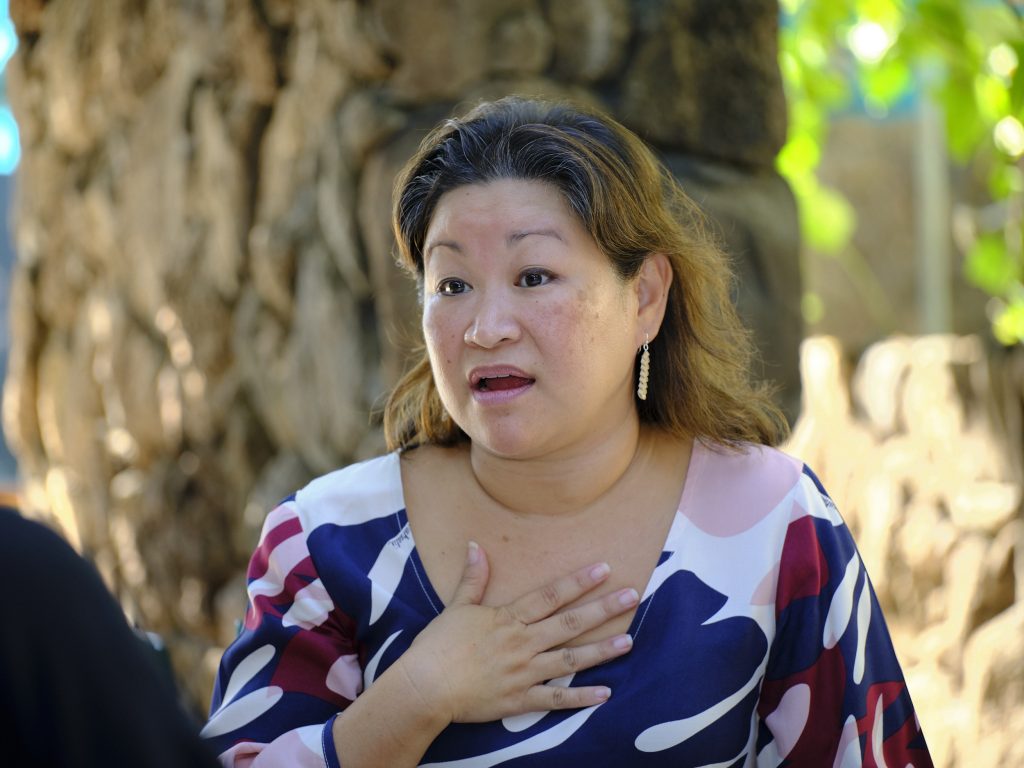 Hawaii‘s new first lady has an impressive resume and a backstory that would make a compelling memoir, but there’s nothing pretentious about her. She comes across as warm, sincere and “down to earth” as she describes herself.

Jaime Kanani Ushiroda Green is a mixed race (Hawaiian-Japanese-Chinese-Caucasian) and an Ivy League graduate of UH Richardson Law School. She has a bachelor’s degree in International Relations from Brown University, studied Latin, Japanese and French, focused on family law as an attorney and loved political work in child advocacy.

“I really think it takes a village,” Green said. “This is the story of my life.”

She grew up in Kaneohe as the little sister of two much older brothers. She was 9 years old when her mother died of stomach cancer in 1987. She remembers that only about a year passed between the diagnosis and the end of her mother’s life.

“My mom kept saying she wasn’t well, but the doctor said it was an ulcer,” she said. Her mother tried chemotherapy, but when no other treatment options were available, she came home to die. Green still gets tears in her eyes when she talks about losing her mother. “She was the nicest, nicest person,” she said. “The kind of mom who would get up early to cook her famous chicken for a potluck. That kind of mother.”

Through her mother’s illness, she said, “My father was really good. He was totally there the whole time.”

But after the death of her mother, her father collapsed. He left the family and Green went to live with her mother’s sister, a single woman who made a modest living as a telephone operator at Hawaiian Tel.

She was admitted to Iolani School, her father’s alma mater, in the seventh grade, but her aunt could not afford the tuition. Her father’s former classmates heard about her situation and got together to raise money for her schooling. “I think they put on a benefit golf tournament for me,” she said. “They really took me on as a project.”

In high school, Iolani awarded her a Stone Scholarship, a full-time course package for students with strong academic achievements and significant financial needs.

With that support, she excelled in school, taking Latin and Japanese, and becoming a National Merit Scholar. In 1995 she graduated from Iolani and went to Brown University in Rhode Island. Scholarships led her to graduation in 1999. She then returned to Hawaii to attend the William S. Richardson School of Law at the University of Hawaii Manoa. She graduated in 2002 and passed the bar exam on the first attempt.

“I had to decide, ‘What am I going to use my law school for?'” Green recalled. She wasn’t drawn to the criminal defense or prosecution service, and didn’t want to use her studies to brood over contracts. The only area of ​​law she addressed was child advocacy. “No matter what happened, I knew I could always defend children’s rights,” she said.

She worked at a nonprofit called Project Visitation, which helps siblings who are placed in different foster homes stay connected. She worked for Oakland State Senator Suzanne Chun, who was chair of the Human Services Committee and did policy work for children and families. It was 2005 at the state Capitol when she met Josh Green, who was elected governor on Tuesday. At that time he was serving in the state House of Representatives.

They married in 2006 and daughter Maia was born in 2007. Their son Sam was born four years later. She stopped working after the first baby and focused on being a mother and partner in her husband’s projects and ambitions. She has also served on the boards of nonprofit recruitment agencies such as Pacific Gateway Center and Hale Kipa.

She doesn’t throw herself into the role of Hawaii’s first lady with a big predetermined to-do list. She’s more aware and observant than that. She talks about growing into the role and figuring out how to best use her skills and training to serve.

“We can shape the role of First Lady in any way we want, like Josh LG was. Everyone used to ask, ‘What does the Lieutenant Governor do anyway?’ He turned it upside down and made it what he wanted. He didn’t want to stand and wait for the governor to give him a project,” Green said.

“When people get to know us, they know that Josh wouldn’t have a favorite project for me. Whatever political issue I’m interested in, he’ll tell me, ‘Do it.’ … He really values ​​me as a partner. I’m the one he bounces ideas off of.”

She intends to be an active, dedicated First Lady. She hopes to open Washington Place up for more events and use her experience in children’s affairs and lobbying. She is eager to figure out the role and shape it to suit her strengths. The cocktail party conviviality and ‘show your face’ nature of the campaign was exhausting. She says she hasn’t been home to cook dinner in months.

That may not change now that the campaign is over, but she hopes it will ease off a bit. She describes herself as somewhat of an introvert, although she enjoys meeting people and hearing about their lives. “I can identify with people one-to-one. I’m not good at all at shallow talk. When I go to an event, I think, ‘Who do I know in this crowded room?’ I didn’t have to be in my comfort zone during the campaign because people want to talk to me.”

Josh Green is Jewish. Jaime Green grew up in The Church of Jesus Christ of Latter-day Saints. Her children were baptized in the LDS temple but attended a Jewish preschool. The family celebrates both Hanukkah and Christmas.

“The blending of religion and culture and living as a family with school-age kids—I think we as a family represent a lot of what Hawaii is today,” she says.