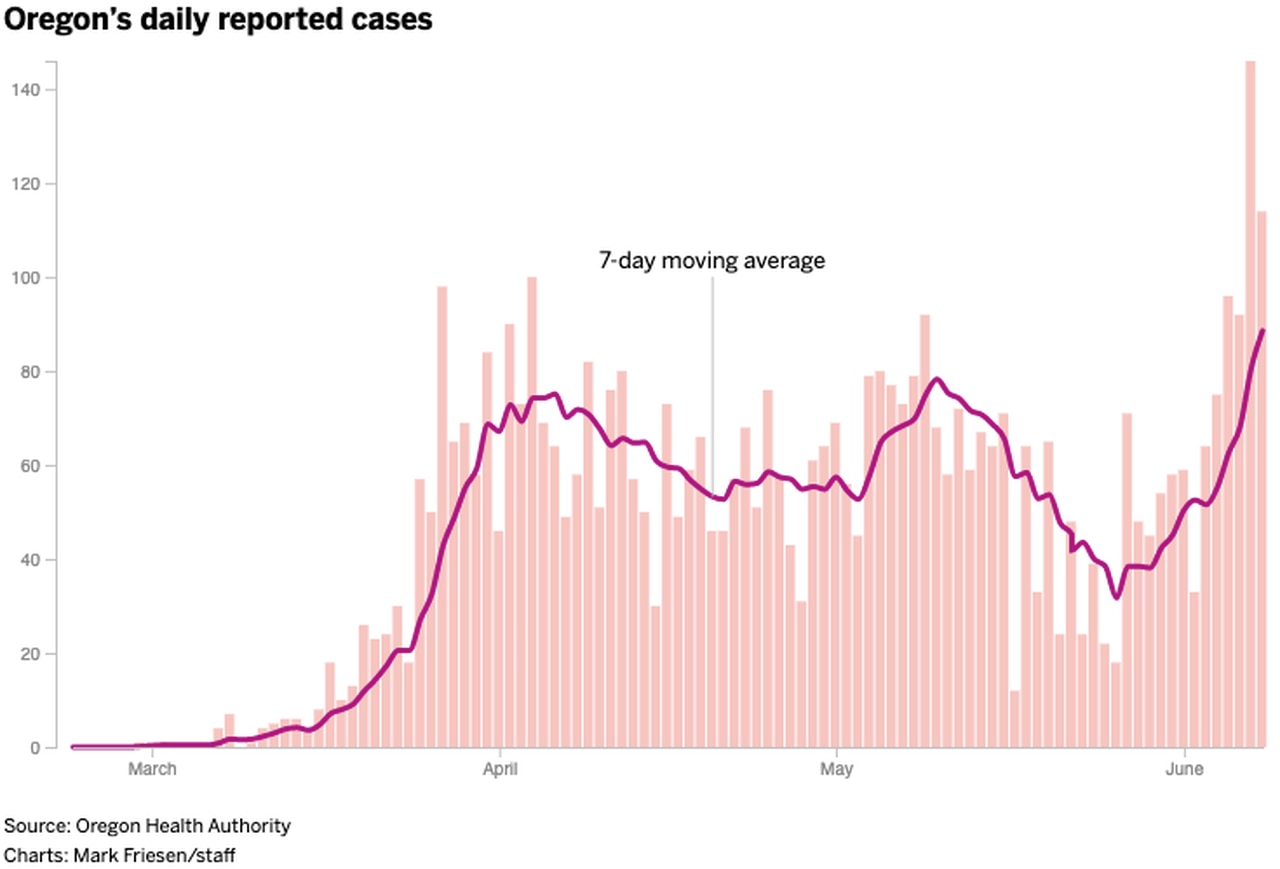 Oregon coronavirus infections have hit an all-time high. Officials say it is too early to draw conclusions.

In the past week, more Oregonians have been identified with coronavirus than ever since the pandemic began. At the same time, the residents of the hospital with the virus increased by 40 percent.

The two statistics are a sobering reminder that the coronavirus is still a long way from being contained as summer is looming.

The Oregon Health Authority reported 620 confirmed or suspected COVID-19 infections last week, including the state’s largest and second largest daily case numbers of 146 on Sunday and 114 on Monday.

This took last week’s moving average to nearly 89 infections per day, or 10 more per day than Oregon’s previous high. The number of infections reported daily hit its low point two weeks ago, but has now doubled.

State health officials said Monday the rising case numbers were not necessarily a sign of alarm.

They pointed to record-breaking tests and a major workplace outbreak, both of which said they helped tip the balance up.

Health officials would not quantify how many daily infections or what percentage of positive tests would raise broader concerns, saying they wanted more data and wanted to look at the picture holistically.

“It’s hard to say anything specific about the dates of a few days,” said Dr. Paul Cieslak, the Oregon Medical Director for Communicable Diseases. “We really have to observe the trends and draw conclusions with a little retrospection.”

However, Cieslak acknowledged some concern about the recent surge in active hospital admissions, suggesting that people seek care faster and the sick are not leaving quickly.

The number of Oregonians hospitalized with a confirmed case of COVID-19 stood at 46 as of June 2, the lowest since numbers began to be released by the state. But the number climbed to 65 people by Monday.

“This is one of the worrying factors that we need to keep in mind,” said Cieslak.

An outbreak at Pacific Seafood in Newport infected at least 124 people, or about one in five Oregonians identified in the past week. Almost all of these infections are in people who have been tested with no symptoms, officials said.

“We think that these rising case numbers give cause for optimism,” said Dr. Thomas Jeanne, deputy state health officer and deputy epidemiologist. “Because they mean our strategy of stepping up testing and contact tracing related to outbreaks … is working.”

Cieslak said he didn’t look at the data closely enough to know if Oregon was seeing an upward trend in identified infection cases after outbreaks in the workplace were addressed and eliminated.

Jeanne said that was not the case.

Meanwhile, the Oregon Health Authority said test results for the past three days show that one in 20 people tested for coronavirus is infected.

That’s also a less than 3% increase for much of the past week, but this was due to testing of people in workplaces with known infections, officials said.

“To a large extent, the number we see on any given day will depend on how aggressively we tested and who we test,” said Cieslak.

The health authority reported a general downward trend from mid-May to the end of the month last week. Nationwide statistics now show a weekly increase from 26 new hospital admissions to 33 for the week ending Saturday, although that is generally in line with numbers as the month progressed.

Officials warned against investigating the numbers too closely without a background of public health research.

“There are many different ways to look at these numbers and they won’t always lead to valid or useful interpretations,” said Jeanne, noting that the state has a large team of epidemiologists who review the numbers on a daily basis.

“We don’t necessarily jump on every small peak or every valley, because we only know what is important from experience and by looking at trends,” he says.

Most Oregon counties reopened on May 15, and Governor Kate Brown approved 29 last week to move into a second phase. Only Multnomah County remains to enter Phase 1. Officials asked Brown for approval effective Friday.

Multnomah County has hosted more than a week’s demonstrations over the death of George Floyd, which drew thousands to downtown Portland each night as part of the national movement.

Oregon health officials said they would monitor new infections for signs of illness in protesters and that information would be publicly shared.

Charles Boyle, a spokesman for Governor Kate Brown, said in a statement that Brown had always expected coronavirus infections to spike when the nation reopened.

The number of cases in Oregon as of Monday stood at 4,922 confirmed or suspected infections from nearly 150,000 people tested. The death toll is 164.

Right now, local and state health officials have sufficient capacity to track down and isolate new infections and there is no undue strain on the hospital system, Boyle said.

If the number of infections increases significantly during the week, “it will be a cause for concern in these communities,” he said.

“We will test every step of the reopening as we move forward,” added Boyle, “and take a step back if necessary.”

Mark Friesen and David Cansler contributed to this report.

Subscribe to Oregonian / OregonLive Newsletter and Podcasts for the latest news and top stories.