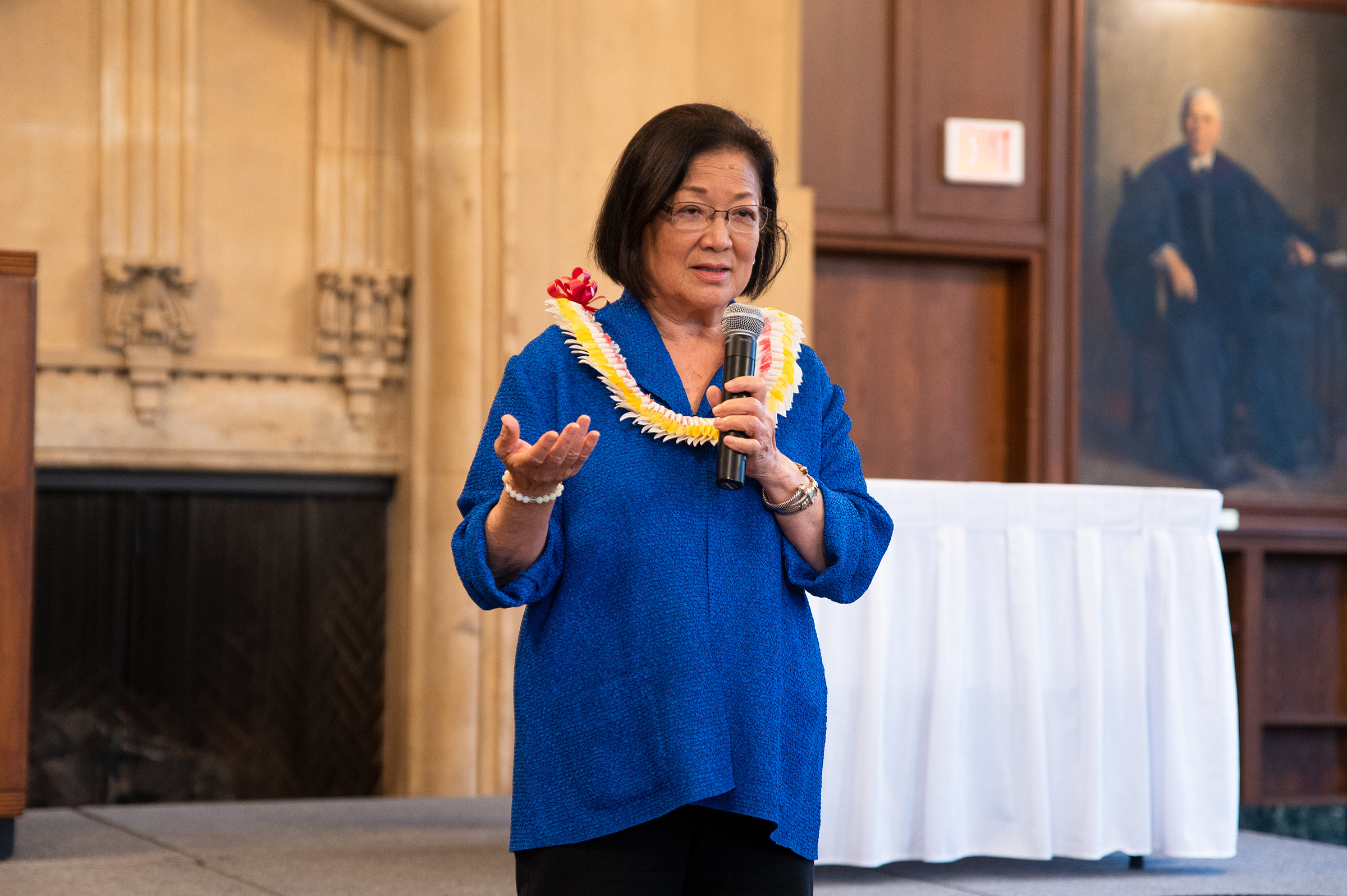 In an interview with The Michigan Daily, LSA student Ellie Omori-Sampson, founding member of MIHI, said her main goal for the event was to promote Hawaiian representation at the University of Michigan. She said she felt Pacific Islanders were underrepresented in Asian American and Pacific Islander communities.

“Even with ‘AAPI,’ ‘PI’ is very underrepresented in AAPI rooms on campus, which I’ve noticed,” Omori-Sampson said. “So bringing a senator from Hawaii who’s Asian American and fighting to also promote Pacific Islander representation…gets something in[the audience’s]mind about being aware of Hawaii, being aware of AAPI groups.” ”

Hirono first spoke about her career as an elected officer, which began in 1981 in the Hawaii Senate. When she was elected to the US Senate in 2012, she was the first Asian American Senator and the only immigrant to serve on the Senate, having moved to Japan at the age of eight.

Hirono said that throughout her legislative career she has learned the importance of persistence when fighting for the causes that matter most. Hirono pointed to the stalled Voting Rights Act and the law’s repeal Roe v. calf as examples of why people need to keep “showing up”.

“Half the battle is revealed,” Hirono said. “By ‘show up’ I don’t just mean showing up physically, but staying the course. Because the battles we thought we were fighting are not won, constant vigilance is required.”

In an interview with The Daily after the event, Hirono urged young people to vote in the upcoming Nov. 8 general election, particularly with a constitutional amendment to protect abortion access on the Michigan ballot.

“Democracy is at stake, especially for young women,” Hirono said. “They have fewer rights than their mothers and even their grandmothers – that should motivate them to do one thing: really get angry about it and then (two:) do something. At the moment they can vote.”

Hirono said her first political awakening was taking part in protests against the Vietnam War.

“I wasn’t one of the leaders of the anti-war movement, but (the protest) was enough for me to question what our government was doing for the first time,” Hirono said. “I made friends with other politically active people … and so we all decided that we needed to do more to get seats at the table.”

Hirono also spoke about some of the Senate’s recent legislative accomplishments. She noted the passage of the COVID-19 Hate Crimes Act in May 2021, which she co-introduced with Rep. Grace Meng, DN.Y., as well as the recent Inflation Reduction Act. Hirono recalled her experience negotiating this bill with the crowd.

“We’re in the Senate 24 hours a day, which means nobody goes to sleep or anything, and the Republicans have all these amendments,” Hirono said. “We ended up getting a really good bill — not a perfect bill, but a really good bill that will help families and our communities.”

Amy Stillman, director of the Native American Studies Program at the university, asked Hirono how to remain hopeful as an educator in the face of legislation restricting instruction in schools. Hirono encouraged Stillman and teachers across the country to persevere in teaching what they felt was important.

“Continue to teach what you teach — the true history of our people — the Chinese Exclusion Law, the internment of Japanese Americans, the Muslim ban,” Hirono said.

Stillman told The Daily after the event that she was encouraged by Hirono’s willingness to address these issues and spread misinformation.

“It’s encouraging to know that she gets it,” Stillman said. “She’s … ready to speak out about the lying and the disinformation and how much hypocrisy is going on in Washington.”