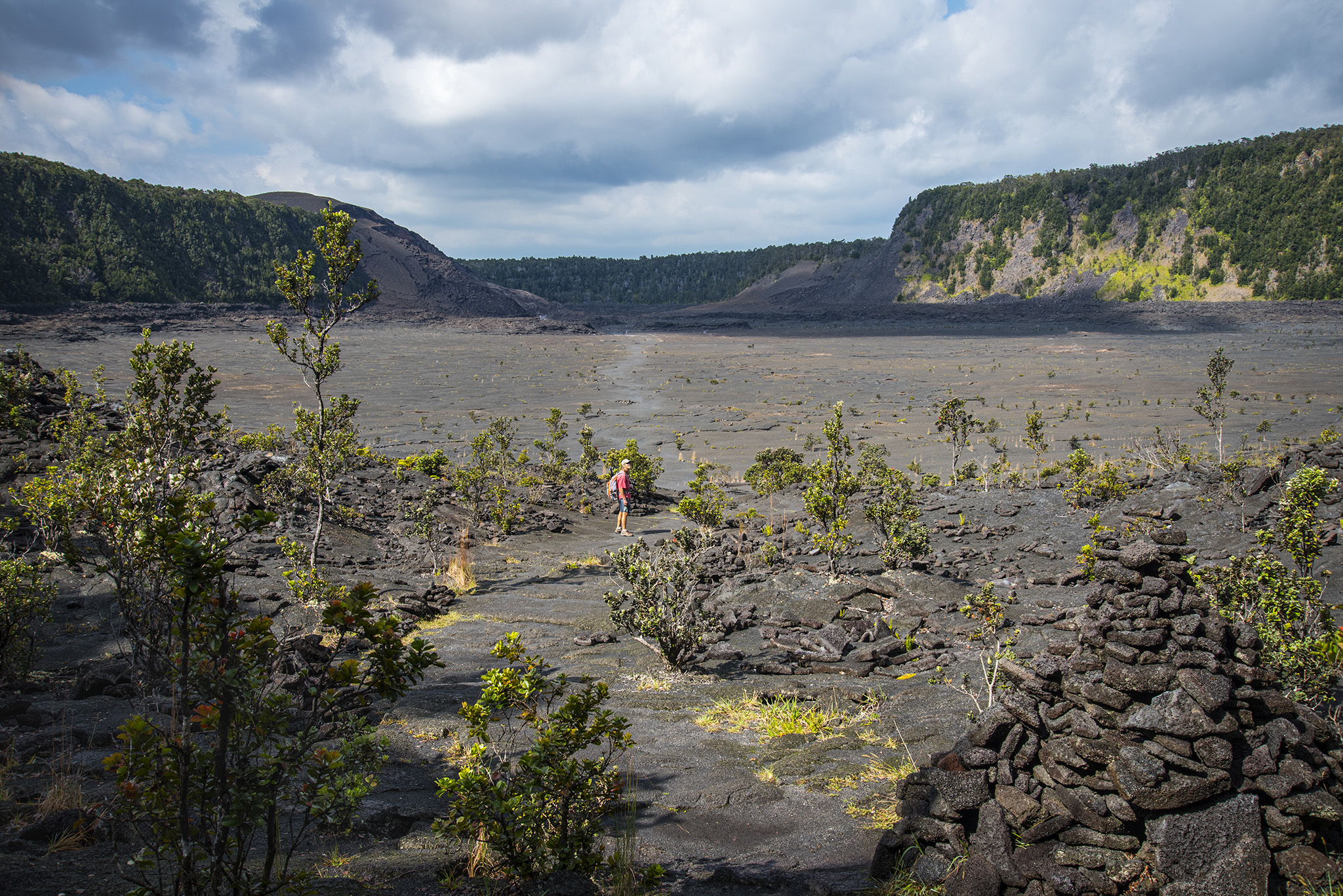 This Hawaii hike takes you across a once-molten lava lake

The crater floor peers at me through the rainforest foliage as I walk along the rim of Kilauea Iki — a 400-foot-deep crater created by Kilauea Volcano, Hawaii‘s most active volcano.

I started my day early in the morning so the 3.3 mile loop hike I set out on is peaceful with only the occasional passerby. The sun warms an otherwise cool forest and the air smells of morning dew as I hit the trail in Hawaii Volcanoes National Park.

The trail gradually leads me down to the crater floor of Kilauea Iki. It’s a nice, well-maintained walk, but I’m excited for the main attraction — and the occasional views scattered through the trees are a major annoyance.

While Kilauea Volcano is Hawaii’s most active, it’s not the youngest—that honor goes to Kamaehuakanaloa (formerly Loihi), which is currently erupting underwater. Kilauea is a shield volcano that is low and long with many craters. Halemaumau Crater is the most famous, known for its glowing red lava lake.

But on the other side of the caldera from Kilauea, separated only by a tree-covered ridge, lies Kilauea Iki – “Little Kilauea” in English. Although smaller than neighboring Halemaumau, this crater is still large at about a mile wide.

The last eruption at Kilauea Iki was in 1959, when a spectacular series of lava fountains shot 50 to 100 feet into the air and sent lava down the crater walls to the bottom where it pooled.

“I’m watching fireworks that make the Fourth of July look like some guy lighting a match,” an eyewitness said in a 1959 Honolulu Advertiser newspaper article. “Observers called it ‘more amazing than anything that’s happening in Halemaumau is’.”

After about a month, the eruption stopped and formed this hardened lava lake that you can hike across today.

There is a pause in the trees as I turn to make my final descent to the crater floor. When I get there, I stop. A few hikers pass me to continue their journey across the lava lake as if this were an ordinary walk through the city park, but I can’t move.

Volcanoes are humbling when you stand in their presence. This is how I felt when I first visited Halemaumau Crater years ago. The incredibly large scale of everything makes you feel so infinitely small and insignificant in comparison. It’s really no wonder that native Hawaiians considered these otherworldly peaks to be the home of gods like Pelehonuamea – the goddess of volcanoes and fire.

The hardened lava lake of Kilauea Iki’s crater floor is long and wide and bounded by the 400 foot high crater walls that I descended from. I take my time walking across it and marveling at the sights. Ahu, or stacked cairns, mark where it is safe to walk across the land.

To my right is Puupuai, a high hill of cinder cones where lava poured a record 1,900 feet into the air. I can’t even imagine what it would have been like to see him in person. But I try my best to imagine lava shooting “five times higher than Puu Puai is,” as the trail guide booklet puts it.

Some people believe that this eruption was a fiery battle between Pele and an ancient god, Ailaau, known as the demon for the devastation of forests. He had ruled the country until Pele arrived, and then he fled. But those battles still exist. Kilauea’s 2018 eruption is said to be the work of Ailaau as well, and its prominent fissure 8 is now named for him.

As I reach the center of Kilauea Iki’s crater floor, I turn around a few times to admire the geological wonder. The hardened lava lake consists of about 86 million tons of lava. The bottom is relatively flat apart from some raised areas that may have been floating islands or parts of Puupuai that slid into the lake. Steam still rises from these terraces and fissures.

Once I make it across the bottom, I realize that the final part of the trail is probably the hardest part — the climb up the crater’s 400-foot wall. Before I go, I’ll take one last look.

I spot the native ohia lehua plants scattered on the crater floor. They are known for being one of the first plants to emerge from lava covered landscapes. A new forest will one day reclaim this land if Pele or Ailaau let it have it.

I’m just glad I can walk across this former molten lava lake that will likely be gone in centuries, when the cycle of creation and destruction so common in this turbulent land of volcanoes begins anew.

The Legends That Made Honolulu