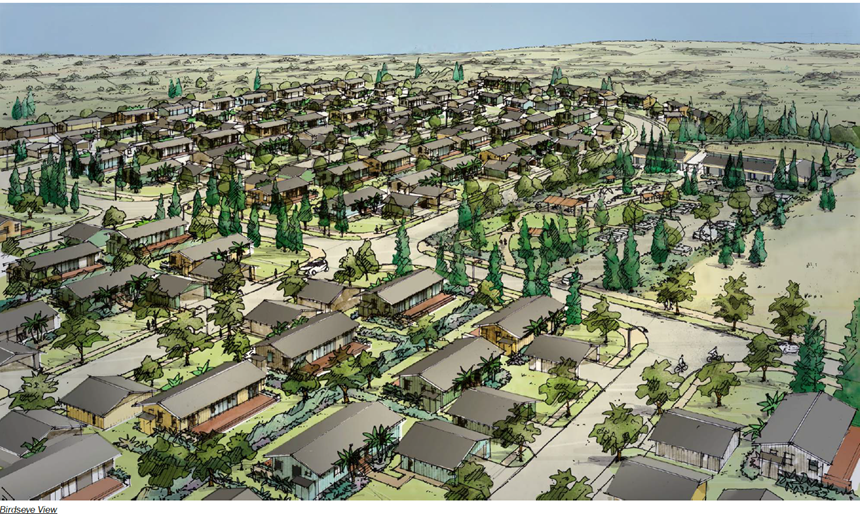 Lanai’s first affordable housing project in decades comes from an unlikely source: billionaire Larry Ellison, who owns 98% of the Hawaiian island. The first houses are expected to be completed this year.

However, some residents have raised concerns about the housing project’s proximity to a county sewage treatment plant and its potential negative public health impact. They’re also disappointed that the units are for rent and not for sale, and they’re concerned that off-island folks will pocket the rents and increase Lanai’s overall population.

Last November, the Hawaii Land Use Commission gave the green light to the Hokuao on Lanai residential project. The residential development proposed by Pulama Lanai, the island management company owned by tech billionaire Larry Ellison, would be Ellison’s first since acquiring the property in 2012.

It was also an important milestone for the island, which has not seen an affordable housing project like this since the early 1990s. Hokuao offers 150 two-bedroom single-family homes for rent on lot sizes starting at 8,000 square feet. 76 of the apartments are designated as permanent affordable housing, while the other 74 apartments are rented at market prices. All houses are fully furnished and have solar roof panels with backup batteries. The project also includes a small park and community center.

The project has been widely welcomed by Lanai residents who are struggling with housing shortages across Hawaii. The island’s low inventories have pushed up prices, and residents have had to choose between living in overcrowded multi-generational homes or moving away.

“When I moved here I agreed to live with my significant other and his family. Over time, other family members joined the household,” said Alice Granito, who moved to Lanai in 2003. “While it is disappointing that this project does not have any homes for sale, it is great to know that units for sale are available for rent. This relieves families who live in multi-generational and multi-family houses. Personally, I am happy about the opportunity to be able to move into a single-family house on my own.”

On a small island with about 3,000 residents, a school, a hospital and no traffic lights, the additional housing will also help recruit workers: clerks for Pulama Lanai or other similar facilities, and essential workers such as teachers, nurses and police officers.

“Hokuao is just part of Pulama Lanai’s overall vision to create a sustainable and thriving community,” said Keiki-Pua Dancil, Pulama Lanai’s senior vice president of government affairs and strategic planning, in an email to SFGATE. “Over the past decade, Pulama Lanai has worked with residents to bring the first hospice and pharmacy to Lanai, restore the community pool, support youth athletic programs, and create a dual-credit program with the University of Hawaii to provide higher learning opportunities to improve for Lanai students.”

Most of Hokuao’s lands were former pineapple fields that have been abandoned since 1992, when pineapple production ceased. The property was selected for its proximity to Lanai City and the ability for its residents to easily walk to town. However, the county’s wastewater treatment plant is also located on the southwestern boundary of the project.

“On days with no trade winds, many residents report a strong odor emanating from the facility and into Hokuao’s proposed construction,” Gabe Johnson wrote in a letter to the Maui County Department of Housing and Human Concerns. Johnson is a member of the Maui County Council for Lanai and chairs the Affordable Housing Committee. “In some cases, that smell is enough to make your eyes water.”

Fairfax Reilly, another Lanai City resident, wrote, “I’ve been here for 42 years. The smell is enough to induce tears and a runny nose.”

The majority of the sewage from Lanai City and Koele is pumped to the county sewage plant, which is designed to process up to 500,000 gallons per day.

A study of the potential air quality impacts was conducted by a third party for Pulama Lanai and included a mid-morning visit to the treatment plant on a day when odor was absent and trade winds were blowing at 10 to 15 miles per hour.

The Hawaii Department of Health’s standard for hydrogen sulfide is less than 0.025 parts per million over an hour average, but no measurable levels of hydrogen sulfide were found during the site survey. The report concluded that it is “probable that the project area currently meets state and federal air quality standards,” but recommended a 300- to 600-foot buffer between the project and the wastewater facility. Therefore, Pulama Lanai included a 600-foot buffer in its plans.

However, the study also recognizes that meeting the standard does not mean there will never be an odor.

“Sewage treatment plants are not generally considered to be significant sources of air pollution, but they can result in the release of small amounts of airborne odorants,” the study states. “The types and amounts of compounds in the air are not generally considered to be harmful to health, but when they occur in high enough concentrations off-site, they can be detected by odor and potentially pose a nuisance to nearby residents and businesses.”

However, local residents are concerned about days when there are no trade winds or winds from the other direction.

“Sure, if the Kona winds [from the southwest] prevail, the treatment plant will become a significant – and no doubt detrimental – part of the project’s environment,” wrote Lanai’s Robin Kaye in his comments to Pulama Lanai.

43 years later, long-term care residents on neighboring islands could finally get their own ombudsman